Greta Thunberg, the teenaged activist who helped galvanize a movement against climate change, has been named Time’s “Person of the Year.”

"Thunberg began a global movement by skipping school: starting in August 2018, she spent her days camped out in front of the Swedish Parliament, holding a sign painted in black letters on a white background that read Skolstrejk för klimatet: “School Strike for Climate.” In the 16 months since, she has addressed heads of state at the U.N., met with the Pope, sparred with the President of the United States and inspired 4 million people to join the global climate strike on September 20, 2019, in what was the largest climate demonstration in human history." (source: Time)

Please join us in congratulating her, and thanking her for her hard work on this critically important issue. 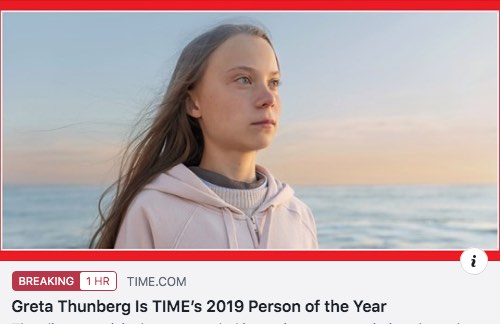 By signing, you agree to WomanUp’s terms of service and may receive updates on this and related campaigns and offers from WomanUp. We agree that you can unsubscribe whenever you want.